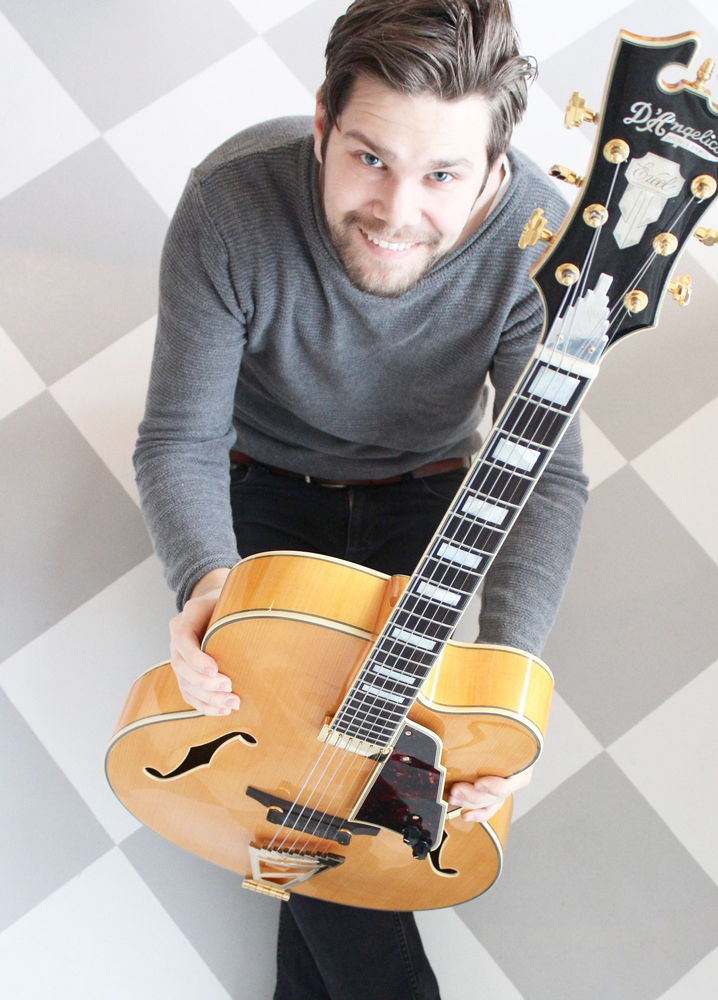 Emil was born in 1987 in Bengtsfors, Sweden. He started playing the guitar at the young age of 9. His teacher at the Music school in Bengtsfors was a great inspiration and he gave him his first opportunity to play for a live audience. Emil’s first guitar was a nylon string acoustic. Then for Christmas he received an electric guitar which started his discovery into the world of blues, funk and rock guitar. While attending a music program (gymnasium, estetiska programmet) in Åmål, his interest in playing guitar grew even stronger. During this time Emil played in several bands and took part in many different projects. The day that ultimately changed his life was when Emil heard Tommy Emmanuel for the first time. After listening to Tommy’s unique way of playing fingerstyle guitar, Emil was totally overwhelmed. From that day Emil put his entire focus on learning more about fingerstyle guitar. During his research he discovered other great fingerstyle guitarists such as Jerry Reed, Chet Atkins, Merle Travis, Doyle Dykes, Richard Smith, Pete Huttlinger and Jim Nichols.

After finishing high school in Sweden, Emil moved to the United States to study music with an emphasis on guitar at the renowned Musicians Institute in Los Angeles. At MI, Emil got to study with many world class guitar instructors and performers like David Oakes, Carl Verheyen, Chas Grasamke, Jimmy Wyble, Jamie Findlay, Al Bonhomme and Allen Hinds. They were all great inspirations to him. And at MI, he also got to meet and jam with many of his favorite guitarists. In 2007, Emil was awarded the title of “Outstanding Player” at MI for his graduating class. After graduating from MI, Emil continued to play with and study with many amazing guitarists in the Los Angeles area. Emil also taught private lessons at this time and was invited to teach the “Acoustic Intensive” class at the “National Guitar Workshop” in Los Angeles in 2008. After this he went into the studio to record the guitars for Jami Lula’s record “There’s a Healin’ Goin’ On”...

During the fall of 2009, Emil had the opportunity to play at several guitar festivals in Sweden. At the biggest guitar festival in Sweden, “Uppsala International Guitar Festival”, Emil won the “Young Talents” competition which aired on the radio all over Sweden. At the “Melleruds Gitarr Festival” Emil first shared the stage with the amazing guitarist Georg “Jojje” Wadenius, who also invited him to play together at the “Nordic Acoustic Guitar Festival” in Helsingborg and at the Polar Music Prize in Stockholm 2012.

Emil and Georg stayed in contact and are performing as a duo from time to time. In November of 2009, Emil received a scholarship from the Royal Academy of Music, “Albin Hagström Memorialfund”, in Stockholm where he also performed live with Janne Schaffer. In March of 2010, Emil won the “Guitar Peoples Prize” in the category “Up And Coming” wich was awarded to him at the renowned Jazz club “Fasching” in Stockholm. Emil has recieved more scholarships the last couple of years, and continues to work hard on his music and his playing.
Presently, Emil performs regularly either solo or with his wife, Zandra Ernebro, a very talented singer, who also studied at the Musicians Institute, as well as other duo projects with incredible musicians like Erik Igelström, Filip Jers and Lucas Brar. Emil has appeard on TV several times, both as a solo-artist and also with different Swedish artists like Sofia Karlsson, Sven-Bertil Taube and Tomas Ledin. At the age of 33, Emil has already performed on stage with some of his biggest guitar heroes, like Eric Bibb, Tommy Emmanuel, Pete Huttlinger and Georg Wadenius.